Woohoo, I made it! Let’s recap where we are and what I have running:

This has been a long, but satisfying, process! Let’s get to the good stuff–the games!

I’ve been able to spend about 3 solid hours playing this game and I adore the Breath of the Wild similarities! This is the first PC game I have ever played so I am still struggling with not having a controller and converting to the keyboard and mouse functions. I’ve got the graphics set to the high settings. The Not Lawlors had me install MSI Afterburner and here is a screenshot: 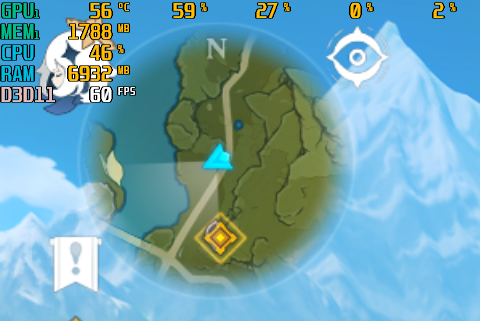 They tell me it looks great on my setup and I am really enjoying the game.

I don’t know anything about this game, or Steam. One of the Not Lawlors setup family sharing so that I could download this small game to test my VM. I guess the kids would need their own Steam eventually. The graphics are set to high settings.

I could tell there was a difference in “smoothness” when panning the camera in this game versus the other. It wasn’t awful by any stretch of the imagination, but I could tell the difference loading them up back to back.

My little wimpy, old GPU is perfect for right now! I am going to spend some time playing Genshin Impact. It will definitely scratch my Breath of the Wild itch! An interesting thing I repeatedly came across while trying to get all of this working was that Genshin Impact “can’t be played on a VM.” Well, it clearly can be. I played it both over RDP and via the GPU HDMI output without any problems.

I’ve proven to myself that a Gaming VM is entirely possible and have worked out almost all of the kinks to make it happen. There still exists the unknown of the KVM hardware. But, until the Not Lawlors move back out, the server has to remain in my office and getting the kids setup with their own gaming stations isn’t going to be possible. I will either buy a KVM switch or the external fans next. After 2 hours of playing Genshin Impact, the Not Lawlors said my temperatures we all perfectly fine.

The PowerEdge T640 can support up to four 300W GPUs. This GPU will eventually be given to Ubuntu/Plex when I look at migrating that off my QNAP. Until then, I will research the best GPU to buy for the kids and then start watching prices.

© 2023 The Lawlor Family. Created for free using WordPress and Colibri